Meet South London artist Fontzerelli. More known across the UK as a host/MC for events like The Jump Off, Supa Dupa Fly and Faded, Fontz has hosted and MC’d for the likes of US Rap legend Nas, Migos, The Game, YG, The UK’s So Solid Crew – reunion concert and Ed Sheeran.

To add to his impressionable resume, he has also produced and helped craft the early career of Jessie J. and toured internationally with chart topping producer/DJ ‘Sigala’ as his official MC. A recording artist in his own right Fontz has released numerous singles building a fiercely loyal following with his work acknowledged through high profile platforms including TV (Soccer AM & MTV) and also prime time radio (BBC1 Xtra). His debut project, VIBE swiftly followed by DEV X HUIE EP kick-started his reveal as a credible artist as well as a formidable host.

With appealing beats and undeniable lyrical genius, Fontz continues to capture his audience with an eclectic range of rhyme, conscious flavours, relevant and powerful lyrics appealing to a diverse crowd.  His new creation, ‘Backadanitebusboy’ only gives sentiment to the credible artist Fontzerelli has become, firmly demonstrating his undeniable talent and longstanding history in the game.

The whole point of Audiotrope is you follow the musicians’ YouTube channels as they can then earn money from their digital content…so GO ON! 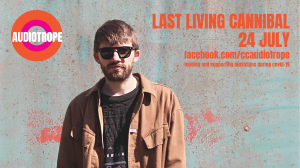